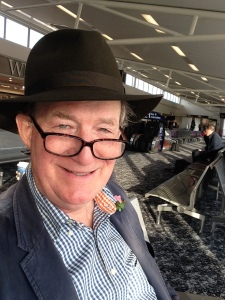 Last Sunday, Simon talked about “Anti-science” on the “Pause for Thought” on BBC Shropshire Radio. It can be heard by going to https://www.bbc.co.uk/sounds/play/p08b54q8 and listening on the timeline between 1:19:30 and 1:23:00.

If anyone wants too discuss the issues raised, they can contact Simon on chair@shropshire.humanist.org.uk

Simon’s original draft was shortened for the talk, but the full text is given below.

Don’t worry I’m not going to talk lockdown, but my subject was prompted by some of the extraordinary things we hear coming out of the mouth of the current President of United States. It’s pretty clear that he doesn’t trust science or scientists or evidence or reason; he prefers to rely on his gut instinct, making it up as he goes along and listening to like-minded anti-science friends.

It got me thinking. Why are so many people against science and scientists? It’s hard to believe but there are international societies claiming the world is flat and that, if you walk far enough, you fall off the edge! And over 40% of the United States are young earth creationists and believe that the world, the universe, was created much as it is now about 8,000 years ago. And then there’s climate change. Despite a vast amount of high-level evidence that the world is warming up due to human activity, there’re many, including Trump and some UK politicians, who deny it.

Humanists like me believe it’s really important where we get our knowledge. So how do we know if ideas are true – or not. Humanists believe that the world, the universe, and everything in it, even the thoughts and emotions in my mind at this very moment, are best understood through natural laws and natural forces rather than the supernatural or superstition.

On the other hand there are others who prefer to use their gut instinct. You know, gut instinct is probably right more often than wrong, but when it’s wrong, it can be very wrong. There was a time when everyone knew in their gut that the world was flat! It was obvious! And there are many who believe stuff they read in sacred books written hundreds or sometimes thousands of years ago or they get their knowledge through personal revelation from what they believe is some ultimate source of truth somewhere out there.

A humanist like me believes that the best way to find out about something is to study it – carefully. That gives me an idea, a hypothesis if you like it. Then I look for things that agree with my idea, but more importantly, I look for things that disagree with it, so I may have to give up my clever new idea or more often change it a bit, so that it’s more likely to be true. It’s the constant questioning and challenging of our ideas by which science moves forward; each idea being refined with new evidence – not claiming to know it all; just claiming to have the best idea so far. Very different from ideas taken from ancient sacred books that don’t change over time. Moreover the challenging of ideas that’s so essential for the scientific method isn’t always welcome with sacred matters.

Some say that science is just for weighing and measuring and test tubes and the like, but really has no place in studying with complex and personal experiences, like our emotions and our thoughts. Well just think about the amazing advances in the science of psychology and particularly neuroscience, which has shown that how we think, the ways we behave and all that we experience, including emotions, beliefs, even consciousness and freewill, are the result of electrochemical changes in our wonderful brains.

Some sorts of questions can’t be answered by science or anyone. Okay so answer me this “Does the colour green sleep badly?” Well there are some things that sleep but the colour green isn’t one of them – so no one can’t answer this question. It’s what philosophers call a category error. Some seemingly straightforward questions of this kind can’t be answered by science, particularly questions asking about the purpose of things (like evolution) that actually have no purpose.

Then there is the mad scientist much loved by film makers. Yeah, there are a few rotten apples in any group, but actually there aren’t that many mad or bad scientists.

Some say scientists seem arrogant, but actually science is humble; science merely says “the evidence strongly suggests that such-and-such is very likely to be true, but we’ll keep an open mind, especially if new evidence turns up”. Rather different from those who say “well, I just know I’m right – I’m 100% sure.”

Does science have all the answers? Of course it doesn’t! No scientist would claim that it does. Brian Cox said on telly the other day that “it’s the not-knowing that so exciting about science!” But so far we haven’t come across anything that can’t be studied. There’s no secret area forbidden to the scientific method.

Who is to blame for these misunderstandings about science? I think to some extent the scientists are to blame. Those of us involved in science need to explain it better.

Sometime ago one of our cabinet minister said he was “fed up with experts” and this was a man claiming to be an expert on politics!