Forecasts of torrential rain and gale force winds were not enough to dampen the high spirits and enthusiasm of the dedicated team of local Humanists as they constructed our third Humanist Show Garden. 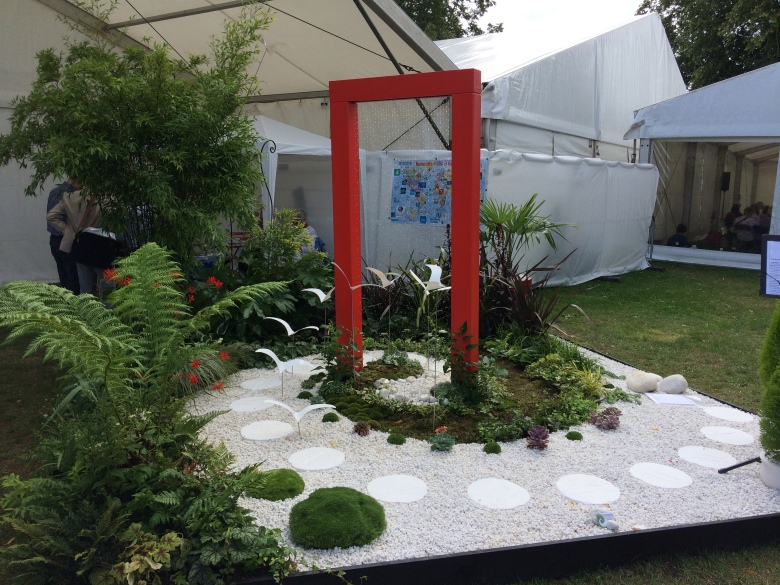 Competition this year was tough and the overall standard among the show gardens was very high. We were delighted to be awarded a Silver Gilt medal and celebrated the success of our good friends Pippa and Warren who won the top prize, and our lovely friends in the next show garden, Ben and Emma, who received a gold. 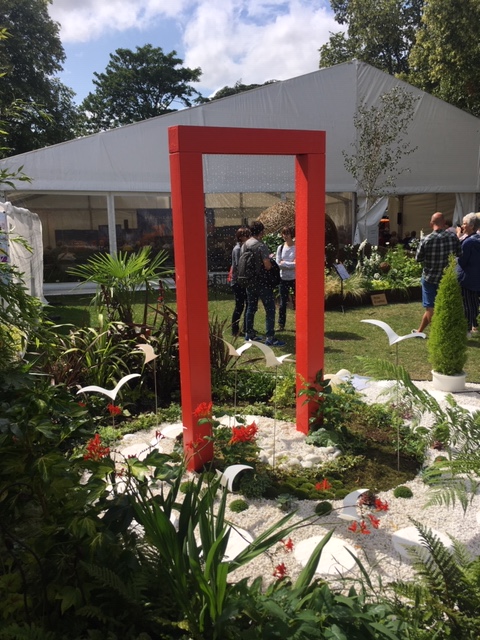 We had many visitors admiring our third Shropshire Humanists show garden. Many people were interested in Humanism and took pamphlets and over 25 were keen to join our emailing list.

The garden, designed by our Shropshire Humanist member Carol Seager, was constructed by her and a merry gang of local humanists. The wonderful design, complying with this year’s theme of “New Horizons”, was transformed by Carol and her team into a stunningly beautiful, ingenious and spiritual garden. 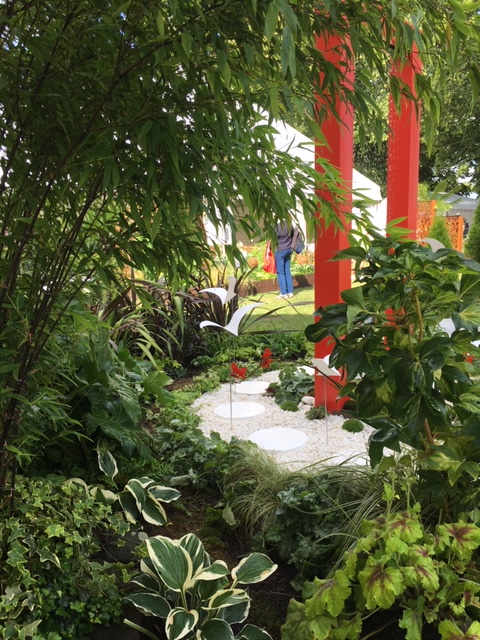 Carol Seager would like to thank the many people who have helped make this possible. Not only the construction team but the many people who have generously donated money, supported the fabulous Plant and Cake Sale, helped resource plants and construct the water feature etc. Most important was the support, encouragement, and love of some very special friends when the going got tough. 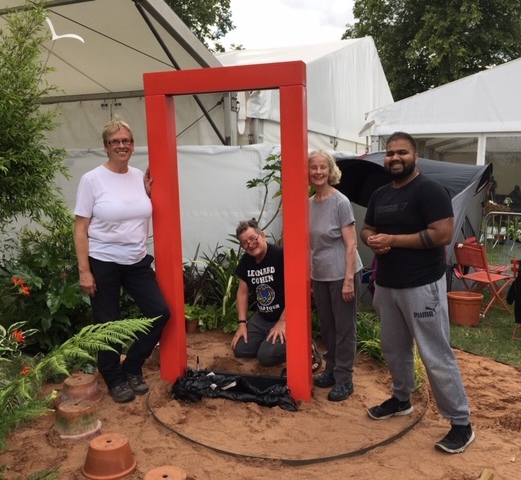 We all enjoyed it immensely. Another successful humanist collaboration.

The Shropshire Humanists garden draws its inspiration from the symbolism of two different cultures, Japanese and Maori, to inspire a global message of hope. The Maori Koru, representing new beginnings and rebirth, combines with the contemplative qualities of the Japanese Zen garden to inform us of different cultures and places, helping us to broaden our horizons.

In Maori culture the Koru (spiral) represents the fern frond opening and bringing life and purity to the world, along with a strong sense of regrowth, new beginnings and new journeys. The Japanese Zen garden represents the natural world in miniature; a place to contemplate the intimate essence of nature and to meditate about the true meaning of life.

Bounded by steel edging, the white quartz gravel spiral of the Japanese Zen garden vividly contrasts and complements the lush green foliage of the Maori Koru. At the centre where the spirals meet is a large portal, similar to both the Japanese Torii and the Maori Waharoa traditional gateways. The rainfall water feature forms a symbolic division between two worlds but also provides an opening onto new horizons. The flock of white birds in rising flight through the portal join the two worlds.

The Golden Ratio spiral is a feature of many natural forms. Succulents illustrating spiral phyllotaxis follow the curve of the Zen garden. The colour palette has been limited to green and white with accents of red to echo the vermillion red of the central arch. The garden also illustrates how both minimalist planting and abundant, dense planting can be used to dramatic effect. Both New Zealand and Japan are island nations with similar climates ranging from subtropical through temperate to subarctic and they share similar flora such as ferns, mosses and grasses. Some plant species, palms, tree ferns, aloe and agave which thrive in these countries, can be grown with care in the U.K. Plants from around the globe have been selected for their structural properties and their suitability to thrive at the limits of a temperate climate.

The garden can be viewed as a metaphor for understanding our cultural differences, discovering our common humanity and looking forward with hope to a new horizon where tolerance, reason and fairness prevail.

“To plant a garden is to believe in tomorrow “.

« 19 September: The Future of Humanism, a discussion
Thursday 17 October: AGM followed by Erica Buist on cultural variations in dealing with bereavement »
Loading Comments...
%d bloggers like this: