Noel Conway’s report on the campaign for Assisted Dying 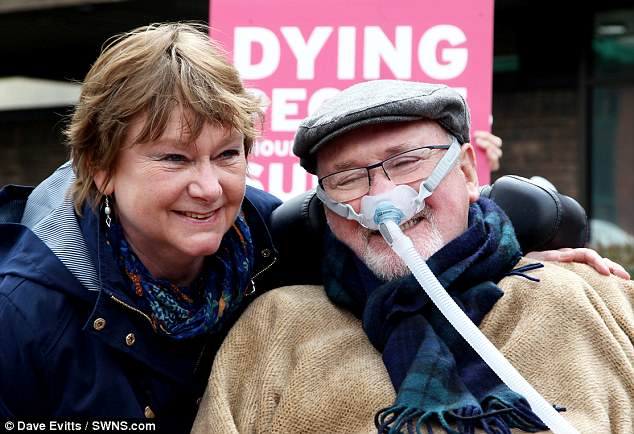 For the Hot Potatoes open mike session on 17 January, Noel Conway wrote an update on legal action concerning a change in the law on assisted dying. Noel is unable to attend in person, so the text was read by Simon Nightingale.

Simon has asked me to bring you up-to-date with where we are regarding the assisted dying campaign.

In July last year we obtained permission to appeal against the original divisional High Court judgment which rejected my claim that UK law breaches article 8 of the Human Rights legislation recognized by the EU, the UK and the UN. We thought we had a good chance of appealing successfully since the Permissions justice identified seven different grounds by which the previous decision of the High Court was deficient. The strong recommendation was that both the legal, ethical and moral arguments for and against assisted dying should be examined in much more detail than it had been. When the decision of the appeals court finally came through in autumn last year, we were dismayed to discover that they merely reiterated the earlier court’s findings, rejected or refused to consider our own extensive evidence and witness statements, and quoted in a very one-sided way from evidence supplied by the opponents of change. Again, we thought we had a very good case for bringing a further appeal and applied to the Supreme Court.

A Hearing was held in November 2018 to determine whether we might proceed to the Supreme Court. We had obtained a new lead barrister, David Pennick QC -regarded as the best lawyer in the UK on human rights. Furthermore,two of the three panel Supreme Court judges i.e. Lady Hale and Lord Kerr had stated in the case of Nicklinson and Lamb in 2014 that in their view the applicants human rights had been wrongly denied by the existing Suicide Act 1961, which maintains a blanket ban on all assisted dying cases. We felt, therefore, quite positive about at least being granted permission to proceed. That didn’t happen. In the eight paragraph judgment from that hearing the justices express their sympathy for my case but reiterated that the grounds given by previous courts should stand without further investigation/debate. We were given no reasons for this other than in their view my case was unlikely to succeed in the Supreme Court.

From my point of view, this is a complete denial of British justice which should have allowed the arguments to be explored in full and each justice given the chance to ask questions and make up their minds accordingly. There is some consolation from the statement by the Permissions court that they recognize the legitimacy of the British courts being able to make a judgment on the issue. Secondly, they acknowledged that the article 8 Human Rights provision was undermined by current British law.

Even had we been allowed to present our case at the Supreme Court, it would still have been up to Parliament to change the law. Some people in the past have argued that going through the legal process is not worth it. I’m beginning to think they are right. The forces of tradition and paternalism remain very powerful in the Conservative institution of the legal system. That is not the end of the matter, however, as I continue to fight as do others, including Humanist UK for recognition of the right to die, a basic human right. Today, I’m pleased to see the Daily Mirror has published a front-page article on the decision of the Royal College of physicians to survey its members on the issue. They are currently opposed. The editorial in the Mirror throws its weight strongly in favour of a change to the law. They have quoted extensively from an open letter I have sent to MPs urging them to support assisted dying when it comes before Parliament again.

« 19 February: Ludlow and Marches Humanists talk, on the big change in religion and belief in UK
Words matter »
%d bloggers like this: